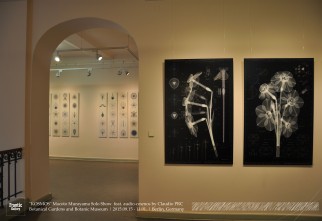 In the middle of the 19th century German scientist and explorer Alexander von Humboldt presented to the world his “Kosmos. A Sketch of the Physical Description of the Universe “ with intention to summarize the work of his life and reach “a point of view from which all the organisms and forces of nature may be seen as one living active whole, animated by one sole impulse.” The struggle to “recognise unity in diversity” and “to grasp Nature’s essence under the cover of outer appearances” resulted in a 5 volume treatise that coined the term “cosmos” used today and insisted on the notion that universal laws are as well applicable to the apparent chaos of the terrestrial world.

In the beginning of the 21st century Japanese artist Macoto Murayama, working in the field of new media art, recognises in Humboldt one of the sources of inspiration. Uniting science and art he uses latest computer technologies to create botanical illustrations that follow scientific traditions while giving new images to the architecture, mechanics and general laws of organic forms. The precision and “correct” depiction of the object meets in his works with the aesthetics and enjoyment of the plant in analysis. Murayama dissects and researches the flowers, makes numerous sketches and photographs of the details studding their structure and then, moving into digital dimension, recreates the plant body with the help of 3D computer graphics software. He applies indications of measurements, names of parts, scales and other descriptive elements with excessive details, creating a “blueprint of nature” where the mechanisms and the general laws of nature come to the surface entering a fascinating relationship with its beauty and elegancy. Yet limited and experimental, his approach replays the struggle of the great scientist Alexander von Humboldt and searches for a way to reveal the “general connection in one great whole, moved and animated by inner force”, having as the final aim the creation of a “sketch” that reveals the harmony in the base of the ordered universe.

Macoto Murayama’s solo show “Kosmos”, while presenting a large selection of prints and several video works, strives to define and research the possibility of the “Humboldtian Artist”. For Humboldt, the scientific approach was not separable from the fascination with Nature, and his “Kosmos” signified both “order of the world, and adornment of this universal order”, while on the other hand Humboldt believed that Art could incorporate and surpass science in conveying the perceptual truth of the whole if the artist painted the (natural historical) truth of particulars. Could Murayama, with his original synthetic approach, shed a light on or even give us an idea of the “Humboldtian Artist”? While basing his art works on strict rules of evidence and revealing patterns and principles in a fascinating manner that does not just overcome the limits of the species but the organic world itself, Murayama’s images give us access to the creation which overcomes a distinct separation line between “subjective” and “objective”, fantasy and meticulous observation, artistic inspiration and scientific research. Doesn’t the impact of Murayama’s works reveal the force of “Kosmos”, which is “nature as a whole” inseparable with the fascinated mind that observes it?

The return of interest in the work of Humboldt in scholar society, the new edition of “Kosmos” in 2004 and the consequent formation of this scientist´s image as cosmopolitan ambassador of German culture and civilization for the 21st century gives a firm ground to raise these questions and along with these recent movements present Macoto Murayama’s perspective on the “Humboldtian” manner of studying and representing nature as well as his original image of the cosmos.

“From The Nebular Stars to The Mosses on The Granite Rocks”
music performance by Claudio PRC
During the opening reception: 2015 September 15 (TUE) 16:30-18:30
The Main Tropical Greenhouse, Botanic Garden Berlin

Following Murayama’s approach which combines digital with organic, we invite electronic musician Claudio PRC to perform on the opening day of the show in the centre of the jungles, which were recreated in The Main Tropical Greenhouse of the Botanic Garden and Botanical Museum Berlin. Using a context of a visual art exhibition inside a natural history museum we would like to share his ideas on “Kosmos”, thus extending the “harmonious whole” from image to sound. It is techno music of this artist that will let us reflect in another way Humboldt’s ideas of inseparable interplay of harmony and strictness: as Humboldt was saying “the stars as they sparkle in firmament fill us with delight and ecstasy, and yet they all move in orbit marked out with mathematical precision.”

The structure of many of Claudio’s electronic music sets – the journey he proposes to the listener – in large extend repeats the way Humboldt leads his readers into the “Kosmos”. With ambient and endlessly expanding cosmic sounds Claudio PRC shoots into deep and infinite, free flow space making us first lose the grounds and get the distance, as well as the larger picture that surpasses the individual or a moment. Then, after we reach “the nebular stars”, he leads us gradually back to “earth”, connecting the universal with the local, uniting the echoing and running into shade of endlessness tones with hypnotic ethnic sounds of shaman’s drums for instance. (refer to Claudio PRC Smoke Machine podcast for example). The journey continues with its pulsing and swirling energy, but the variety and development of rhythm and tones are strongly consistent and keeps organic coherence in its unstoppable growth, as if led by one universal principle hidden behind it. The endless variations of Claudio’s audio-“Kosmos” infinitely interconnected. The surface and multiplicity in this sonar Nature are united by virtue of their very diversity into the “one great whole . . . animated by the breath of life.” Like the path of Humboldt’s “Kosmos” the journey to the outer world in Claudio PRC’s each music composition brings us to the subjective trip: through mind and spirit and yet undiscovered orders of it.

The title of the performance is the way Humboldt himself was describing his project and this ambition will be recreated in the audio form and after it’s presentation to the visitors of the show during the opening reception will accompany the exhibition as a recorded set with free access on social networks and official sites of the exhibition.